Orthopedic coding knee procedures requires knowledge of knee anatomy. The knee joint is the largest and most complex joint of the body. It is a modiﬁed hinge joint that consists of three joints within a single synovial cavity:

Synovium (Synovial membrane) is the delicate, thin membrane that encapsulates the knee joint. The synovial membrane produces synovial fluid which lubricates the joint to reduce friction on the articular cartilage during motion. 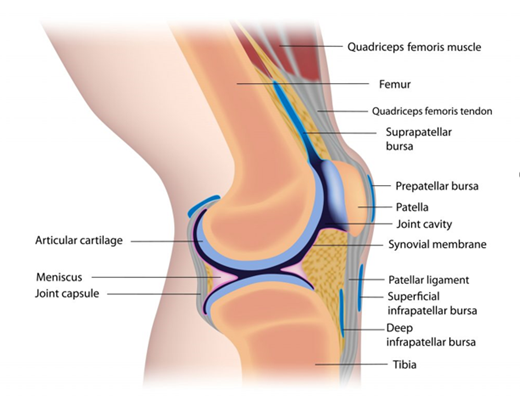 For example, CPT code 29876 shall not be reported for a major synovectomy with CPT code 29880 (Knee arthroscopy, medial AND lateral meniscectomy) on the ipsilateral knee, since knee arthroscopic procedures other than synovectomy are performed in 2 of the 3 knee compartments.

Debridement of Articular Cartilage vs Synovium

A 55-year-old male presents with chronic left knee pain. His conservative management failed, so he decided to go with surgical options. He was diagnosed with left knee primary osteoarthritis. An arthroscopic debridement of articular cartilage was done in both the medial and lateral compartment of the left knee.